I must have marked the wrong box when I ordered a White Christmas; what was all this grey stuff delivered the morning of December 25th?!
Christmas morning, 5:45 a.m., I walked out of my home intending to travel a few short miles to a parking structure rooftop. One of my favorite haunts, this building has a clear view of towering mountain peaks in the Sierra Nevada Mountain Range. This time of year, I can usually count on the location to provide a gorgeous view of sunrise; from the high vantage point, mountain tops look extraordinarily close. As morning rays creep up the opposite side, a 300mm lens easily captures the small, but clear, silhouettes of giant redwood trees dressed in snow along the ridge.
Ready to greet the sun, I closed my front door behind me and walked into the darkness; only to find myself surrounded by ... fog? Fog so thick, you could cut it with a butter knife.

No, I did not go back inside; once I’m on a photo shoot mission, “something” always turns up.
In fact, it’s often a derailment from
my agenda (like this thick fog) that provides the opportunity for great new discoveries.

Then came the second fly in my ointment: With fog blocking my vision past the front of my car, I was having difficulty even driving to the end of my block. As it would still be dark for almost another hour, not at all safe. What to do now? Having two strikes against the planned morning, this was what I call a ‘make or break’ moment. That “Should I stay, or should I go?” thought, after a scheduled adventure is already underway but multiple, unexpected obstacles pop up. There were new decisions to be made. I could have easily said “There goes my great plan to catch the sun cresting the snowcapped mountains on Christmas morning...” and retreated home. Or, I could park my car safely at the subdivision mail boxes and look around; not necessarily in hopes of a good shot, but at least to take the opportunity in front of me; just be present in the moment of the my current reality. Why not? Besides, how long had it been since I’d felt the sensation of standing in the middle of a cloud? When was the last time I’d felt suspended moisture hug my face?

One of the most rewarding things about thinking optimistically is this self-evidenced fact: Making the decision to enjoy changed circumstances, rather than dwell on what has suddenly thrown plans out the window, is where I often find silver linings and magical moments.
This pre-dawn morning did not disappoint; it delivered magic!
The first silver lining was finding that ordinary objects I passed every day had been transformed by the shroud of dense mist. In the number one spot of favorite finds, right outside my front door, were the cone shaped illuminations which cast spotlights on platinum center stages (seen above). Scattered throughout the dark streets, they looked a bit like oversized fairies, guarding the neighborhood. In second place, were the dried pomegranates cradled in bare branches; posing in front of a fog-veiled evergreen.

Near an hour passed rather quickly, and while there were none of the usual signs that daylight was about to break, I could tell the darkness was on its way out; distant objects less obscured by the slightly thinning mist. At last, drivable weather! I had made it back to the end of the block, when silver lining number two appeared: There was little to no traffic on the roads Christmas morning! Shots that would normally be impeded by other motorists were a piece of cake; even captured some out my lowered window without having to unbuckle my safety belt!
Just as I had begun edging onto the surface street, I spotted the first out and about image. With no cars to dodge, I reversed with ease, lined up, and shot; all without leaving my car. As this end-of-block capture, a tree-lined sidewalk with fog playing peek-a-boo between trunks, was so easy to snag, it became the proverbial "carrot dangling in front of me", encouraging me to explore farther.

On my way again, I had travelled only 400 feet down the road, when the second on-the-move shot hollered, “Click me!” from the public park. By the time I had my fill of the fog-wrapped, naked shade trees, I was definitely on a “magic roll”

There's nothing quite like that feeling of expecting nothing, then finding something unique, in every direction you turn.

I never did make it to the view of the mountains, I didn’t need to. The final stop landed me at the in town ponding basin; a haven for migrating and local birds. The still obscured sun had risen enough by now to provide lovely indirect light, enough to capture wildlife at a distance. Just before my final Christmas surprise arrived, I had paused a moment to think what a beautiful early Christmas morning this had been. Full of new sights and experiences; not because I’d traveled anywhere new to me, but because Christmas magic had gifted me with something even more enjoyable than the new fallen snow at a distance I’d been hoping for. It had turned where I’d been many times before, into the special version of a magical, winter wonderland, and I was experiencing it up close.
Having walked back to my car to wrap up, I felt the tug to turn around and see if I’d missed anything; and there it was my final Christmas gift.

For a total of approximately 2 minutes, the now higher fog shifted for the first time that morning, right before my eyes, revealing the sun I’d set out to find.  Thank you Christmas magic, for the gorgeous, grey Christmas adventure! 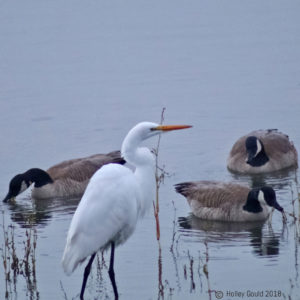 Welcome! If you would like to get to know who is authoring this blog a little better, I've shared some background on myself in the 'About' page; located in 'Menu' at the top of home page. Very much looking forward to sharing topics and suggestions with you which have contributed to my own positive outlook on life, as well as providing information you are welcome to utilize in nurturing your own life's journey. Truly hope you find this blog to be a bright spot in your days, and enjoy the rewards that come with a positive outlook! ~ Holley

Your thoughts? I would love to hear them! Cancel reply

This site uses Akismet to reduce spam. Learn how your comment data is processed.